Can you use the HP Proliant ML115 G5 onboard RAID functionality with VMware ESXi 3.5 is a question that I have seen being asked for a while now.  I thought I’d put this post together to answer this question for those of you that own an HP Proliant ML115 G5 and were considering buying that second hard disk to give it a try.

As you may be aware the HP ML115 G5 has four internal SATA disk connections (see below).  All of which can be used in a RAID configuration (0,1,5) using the servers onboard RAID controller (MCP55). 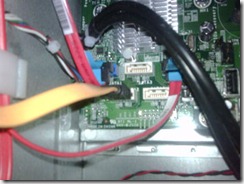 To enable the RAID on your ML115 you’ll need to venture into the BIOS. After enabling the RAID you then choose which of the four SATA ports you want to include in the RAID set (and of course have hard disks attached to). 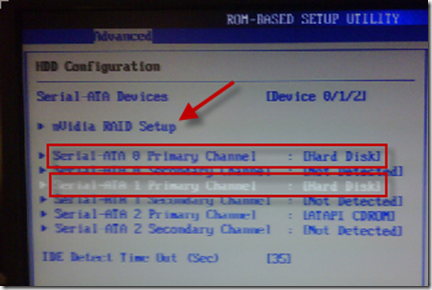 The four SATA ports are:

Before I start I should point out I am using ESXi 3.5 U4 which I am booting off a USB pen drive connected to the internal USB port.

Enabling and connecting up SATA disks to the Serial-ATA 0 and Serial-ATA 1 Primary Channels and then creating a mirror RAID set in the ’ROM-based setup utility’ presents two separate disks within ESXi (despite a mirror set out of the two disks being created). 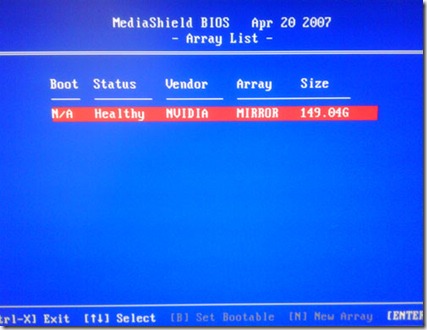 Below: Both disks are presented to ESXi 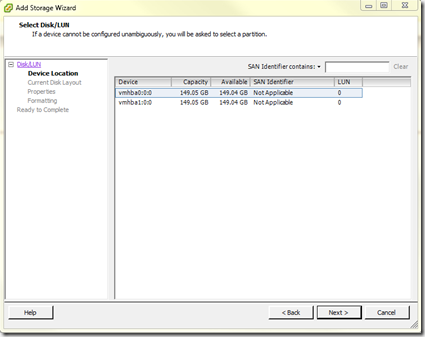 When connecting the SATA disks to ports Serial-ATA 0 Primary and Secondary Channel and then creating a mirror set within ESXi only a single disk device is presented. 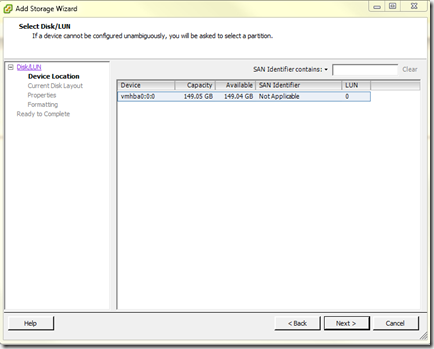 At this stage you may think that all is well with the world and that you now have a pair of mirrored SATA disks to create your VMFS volume on.  Sorry to be the bearer of bad news but this is not the case..  I will demonstrate. 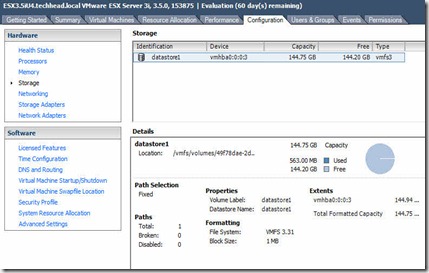 I remove the SATA cable to the Serial-ATA 0 Secondary port and start the ESXi server up again.  Upon starting up the server complains that the RAID set is in a degraded state though, as expected, ESXi continues to boot off the USB pen drive.

Once ESXi has loaded and I connect to the host via the VMware Infrastructure Client (VIC) the data store containing the files I uploaded is still presented and fully accessible.

“This is looking good” I hear you say… though unfortunately when we power down the ESXi host, reconnect the SATA cable to the Serial-ATA 0 Secondary port, disconnect the Serial-ATA 0 Primary port and start the host again we get presented with the following message within the VIC:

As you can see from the message presented by ESXi it cannot see any persistent storage though it has detected some storage where a data store can be created (ie: the SATA disk connected to the secondary port).  Although a mirrored RAID set was created using the onboard RAID controller this doesn’t translate to what is detected by ESXi.

So if you’re looking for a method of be able to use RAID in your ML115 G5 you may want to consider a RAID controller such as the HP Smart Array E200.  I use one in a ML115’ for my home ESX(i) lab and run it using 4 x 250GB SATA disks in a RAID 1+0 configuration.  I find performance more than acceptable running half a dozen VMs over it.  They will cost almost the same as the server itself though you can pick one up for a little cheaper occasionally from EBay and the like.