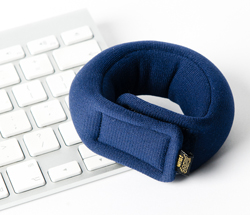 I’ve been suffering from tendonitis for a few months now, a combination of lifting our new 12kg addition to the family (Baby TechHead), and also the fact that I wasn’t able to be particularly active for many months during my recent treatment.

I’ve started to look at ways to be healthier whilst working day to day, and like many of you reading this, it involves using a keyboard and mouse/trackpad for extended periods of time.

I’m adjusting the way I work in a few areas, with the most significant being replacing my traditional desk with an electric height adjustable standup desk.  I’ll save the details on my new standup desk  for another post, though I can say that after using it for a couple of months, I much prefer this style of working.  But anyway I digress, as this wasn’t the topic for this post. 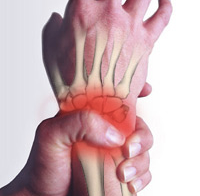 This post is about my looking for a solution to help alleviate and, hopefully, assist in the healing of my tendonitis on my wrist.  I have in the past used ergonomic keyboards, mainly from Microsoft, and have found them good, though since beginning to use a second hand MacPro as my main work computer for the past few years I have found myself using the standard horizontal layout Apple Mac keyboard by default.  Which doesn’t really offer any ergonomic advantages.

With my right/mouse driving wrist being the hand needing the TLC I am looking for something to support my wrist whilst driving a mouse.  I’m familiar with the typical gel filled wrist support mouse mats that you can get, though have never tried one.  Reading reviews on Amazon and the like, these types of wrist support devices come with mixed reviews.  However, after some further trawling of the inter-web I stumbled across a wrist support device called, wait for it…. a Wrist Donut. 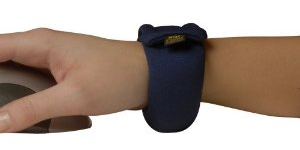 What is a Wrist Donut I hear you say?

Well, it’s a plastic bean/bead filled bean-bag that wraps around your wrist to support it at the right angle when either using your keyboard or mouse.

Instantly attracted to the rather cool name I looked into the Wrist Donuts some more and after reading the rather compelling list of advantages  for using a Wrist Donut, I have purchased my own navy blue “donut” to try.  I also liked the idea that this wrist support was, apparently comfortable to wear, and was permanently (until you took it off of course 🙂 ) attached to your wrist.  They come is decent selection of colours and you can get them customised by having something, such as your name/slogan, etc, added to them.

My Wrist Donut should be arriving within the next couple of days, so I’ll let you know how I get on with it once it has arrived and I have been using it for a week or two, so as to give it a good try-out.

In the meantime, if you want to take a look, head on over to the Wrist Donut site here.   They are made by a small business based in Devon, which also attracted me to buying one for a try as I like to support local business where possible.

Have you suffered from tendanitis or similar and work in IT?  If so, what worked for you?