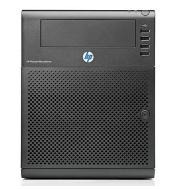 *** ANOTHER UPDATE: 14th January 2011 ***  ServersPlus inform that the last remaining HP MicroServer stock at the reduced price has now gone!  You maybe able to find stock with the £100 cash back deal elsewhere though it is highly unlikely from what I have seen.

It’d be nice to see HP extend a similar deal to the newer HP MicroServer model (the only difference being a 150W vs a 200W power supply and it having a 250GB hard disk).  I personally was expecting a rather more exciting update to the MicroServer than those two minor ‘tweaks’.

Wow, HP have lowered their prices for the second time in as many months on the HP Proliant MicroServer and not since the days of the ML110 G5’s 18-24 months ago have we had a potential entry level vSphere lab server for less than £100 (minus extra memory, CD/DVD drive and cable)!  HP are now offering a whopping £100 cash back on the RRP price of £189.99 ex VAT on all new MicroServers until the end of December 2010.  Unfortunately this HP cash back deal is only for UK based residents, though I’ll keep my ear to the ground for any similar HP Proliant MicroServer deals in other countries and will post them here.

As mentioned in my recent MicroServer blog posts here, here and here the server will suit those of you looking for a small VMware virtualization lab server suitable for running >4-6 low to moderate workload VMs (assuming it is using 8GB memory). For anything requiring more CPU horsepower and/or memory I would recommend taking a look at the ML110 G6.

Check out the ServersPlus site for more details on this great deal and also check out their VMware virtualization HP MicroServer bundle here which offers good value for money and can also have the £100 cash back deal applied to it.  Keep in mind that you will also need to buy a CD/DVD drive and cable for it and that it also only has two DIMM memory sockets, so if you want to take it up to the maximum 8GB you’ll be looking at utilising both sockets with 2 x 4GB DIMMs.  Even still with this £100 cash back deal it offers exceptional value.