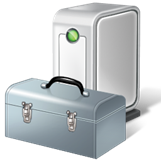 Those of you running nested VMware vSphere ESXi instances will want to take a look at implementing ‘VMware Tools for nested ESXi’, which is an offering from VMware’s Fling team.  If you’re not familiar with the concept of ‘nesting’ all it is referring to is a VM(s) running on a virtualized hypervisor instance, eg: ESXi.  A virtualized instance of the hypervisor running on top of another hypervisor, in this instance ESXi, is also considered as being ‘nested’.

So Why Run VMware Tools On Nested vSphere ESXi?

Although not essential, running VMware Tools on your nested ESXi VM instances does provide you with the following useful benefits:

– Support for the Guest Operations API (introduced with vSphere 5.0 and previously known as VIX API).  This API allows you to perform guest level operations within the VM through the use of VMware Tools which is running on the VM.

– View details such as IP address and hostname of the nested ESXi instance through the vSphere Client.

– The automation of nested ESXi OS level operations via script upon the change of its power state.

How Do You Install Nested ESXi VMware Tools?

What Versions of vSphere ESXi Will This Work With?

This VMware Tools VIB will work with vSphere 5.0, vSphere 5.1 and vSphere 5.5

You can’t install or upgrade the nested ESXi VMware Tools via the usual menu driven method within the vSphere Client.

So if you’re running nested ESXi instances within your vSphere environment, most likely a lab environment, then definitely take a look at this highly useful VMware Fling offering.