I’m sure many of you that are fortunate enough to have access to your own IT test lab will agree that they can prove invaluable when studying for your IT accreditations such as VMware’s VCP.

For those of you looking at building your own VMware ESX test lab here’s an informative article from TechHead guest contributor, James Pearce, that will help you on your way.   James is a Kent based qualified accountant, currently working in information security and technical architecture with  most of his  time “being spent on virtualisation and business continuity at the moment”.

The updated Install, Configure & Manage (ICM) course required to gain VCP for vSphere is still four days despite a lot of new content. To help get the most from the course, I decided to replicate the course test lab on the AMD Opteron based HP ML115G5 – here’s how.

The official course lab has:

Using ESXi on one quad-core ML115G5 with 8GB of RAM, the class lab can be broadly emulated so that all class labs can be re-done later – the only function that won’t work properly is Fault Tolerance.

Since I only have one server, my environment consists of the “physical” install of ESXi (pESXi) and six VMs – the four hosts above, an iSCSI storage VM, and a virtual router to link it all up. Getting ESXi itself on the ML115G5 is straightforward thanks to TechHead’s reference guide on the subject (note that for this lab it’s vital that AMD-V is enabled in the Proliant BIOS).

The network model I’ve built is: 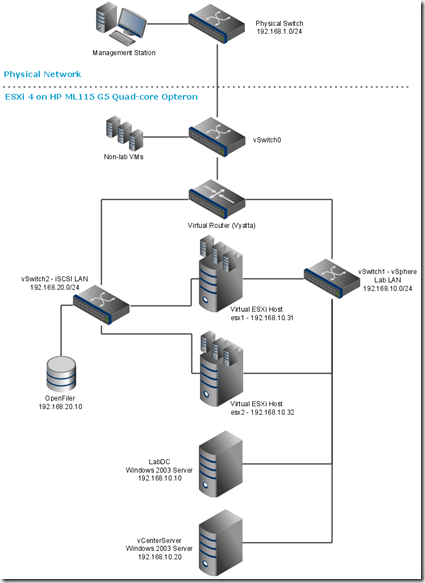 Here’s how the test lab looks in the VI Client running on pESXi: 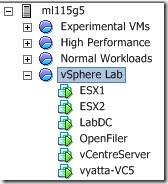 Because the ESX VMs will be attaching their own vSwitches to vSwitch1 and vSwitch2 in pESX, these two vSwitches must be configured to accept promiscuous mode:

Either ESX or ESXi installable can be installed within a VM on ESXi, but there are a couple of points to note:

The actual installation is covered below – first we need the virtual infrastructure running.

Vyatta is a free router application that I’ve used to link the three subnets. It is offered as a pre-configured VM or as an installable CD – I had problems with the VM, but it installs fine from the CD image and the Vyatta guide pretty much covers setup and configuration. For our purposes the configuration of the VM in pESXi is,

My network settings for each are,

OpenFiler provides iSCSI storage that can be accessed by both vESX’s (for vMotion and HA) and pESX. VM settings are,

A Windows DC isn’t really needed, but I’ve added one as the course covers the Windows AD integration to provide access rights (roles). vCentreServer also can’t be installed on a domain controller, so I needed two Windows Server VMs. Minimum spec is 1vCPU, 512MB RAM and 1 vNIC (on the vSphereLab LAN). I tend to use 16GB thin provisioned volumes for Server 2003 system volumes.

The DC can be used to provide DHCP and DNS services on the Lab LAN – my subnet configs are given above. Once DNS is running for the LAB domain (vspherelab.co.uk in my case), a forwarder can be added to DNS on the non-Lab LAN for the domain vspherelab.co.uk via 192.168.10.20 (the lab DC), and similarly the other way around, so everything can find and talk to everything else.

No DHCP is required on the iSCSI LAN as there will only be a few devices on it anyway.

A lot of effort can be spared by disabling the Windows Firewall and Internet Explorer’s Enhanced Security Configuration (hidden in add/remove programs) on every Windows VM.

vmware don’t seem to offer a ‘student’ license so getting vSphere means registering for the 60-day evaluation license and grabbing what you can. Annoyingly certain parts of the software covered in the course aren’t available either, like the new Data Recovery Appliance.

The minimum spec for the Windows 2003 Server VM for vCentreServer is 1vCPU, 2GB RAM and 1 vNIC (on the vSphereLab LAN). The installation will include SQL Server Express, hence the additional RAM requirement.

Installation of vCentreServer itself is straightforward and wizard driven.  The Guided Consolidation, Update Manager and Converter should also be installed. 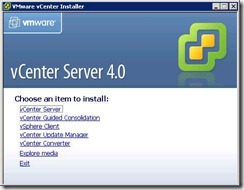 Installing ESX in a VM (vESX)

This is straightforward – create the VM, make the setting adjustments, connect the ISO to the DVD drive and follow the instructions. I installed ESXi for simplicity and because it will run with 1 vCPU. Once installed add the IP address, DNS server (the Lab DC), and default gateway – that’s it. 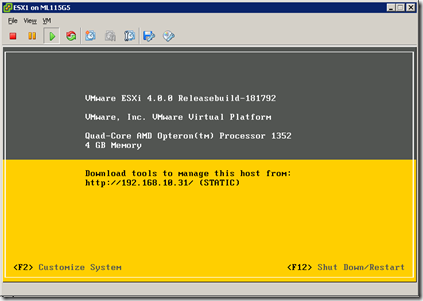 A few settings need to be adjusted, 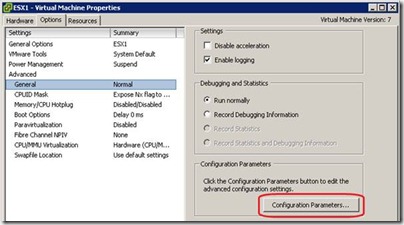 In case you were wondering, Jim Mattson has posted an excellent description of the restrict_backdoor function on the vmware community forums.  Without this line, VMs within vESX (nested VMs) can’t be started.

If configuring a 2 vCPU vESX, add a row so that the processor is detected a 1x dual core with name: cpuid.coresPerSocket and value: 2.

Connecting the vESX to OpenFiler

TechHead has this covered here. If your ESX VM is not finding the iSCSI targets, check:

Performance of nested VMs is fine for test purposes, but naturally the box overall will start to struggle when pushed too far. My machine typically has 10 to 13 VMs running (three or four being nested) and the physical CPU load when all are idle is around 1.3GHz with 7GB RAM used. The biggest limitation is the RAM capacity – once into the last gigabyte, ESX will activate the balloon driver and performance dives, mainly due to the resulting disk contention.

Fortunately even the free ESXi provides resource pools which can help protect any more important VMs running on the pESXi from being bogged down by the weight of the test environment. Also, for important VMs a RAM reservation of 35% of the allocated RAM will avoid vswapping, which absolutely destroys performance (at least when using SATA disks).

Almost everything covered in the official ICM course can be replicated at home with one quad-core ML115G5, the only real exceptions being Fault Tolerance (which starts to work but continually re-starts the guests) and the components that vmware won’t let you get without paying for them, like Data Recovery.

Performance of nested VMs is surprisingly good for lab purposes, each layer of ESX seemingly providing about 10% overhead in raw CPU performance terms, and running virtualised shared storage with OpenFiler enables a virtual high-availability (HA) cluster to be built.

In order to test HA with a reasonable number of slots, each vESX needs around 4GB of RAM. The weight of the overall test environment can be controlled in pESXi with a resource pool, but the 8GB capacity of the ML115G5 can be limiting. This does however result in some good heavy-stress performance analysis work being possible, which couldn’t be demonstrated in the real course lab because the machines couldn’t be loaded enough.